When I lived in Rio Blanco, Father Cull transformed the school into a church so he could say mass there.  But since I’m not Catholic, I’m not exactly sure how he did that.  One night—and this story is in my memoir—I saw candlelight coming from inside the school and heard two people talking.  The next morning, I discovered they’d been burning black candles on the table/my desk.  Was somebody making obeah against somebody else?  The village mayordomo didn’t know, didn’t care, and didn’t want to talk about it.

A king buzzard. In ancient Maya mythology, they carried messages from humans to the gods. Kriols call all vultures John Crow. (Photo by Danny Bales)

END_OF_DOCUMENT_TOKEN_TO_BE_REPLACED

The old house on the right in Punta Gorda was once new and elegant and sparkling white–but unlike the house in San Antonio, this one was built. No obeah involved. (Photo by Joan Fry)

The obeah men who are paid to make spells believe that obeah itself is neutral—it’s simply power.  If someone asks him to make a spell against somebody else in order to hurt him and cause him pain, the power becomes evil.  If someone asks him to make a spell so that his sick child will live, the power becomes good because it will result in good.   Among the Maya—perhaps in an overlap stemming from their own ancient, oral traditions of witchcraft and sorcery—obeah is almost always used for evil.

If bullets are used in the spell, it’s a good bet that the victim will die of a mysterious gunshot wound. (Photo by Joan Fry)

END_OF_DOCUMENT_TOKEN_TO_BE_REPLACED

When I lived in Belize (okay, in 1963 it was British Honduras), the practice of obeah, or black magic, was considered a criminal offense.  A Creole man convicted of making obeah was sentenced to three years in prison shortly before we arrived.  While we lived among the Maya in Rio Blanco we  never saw any obeah rituals—if we did, we didn’t recognize them—but some people told us privately that they had seen them.  Obeah seldom came up in casual conversation, especially not when sac li gwink—Kekchi for “white people”—were present. 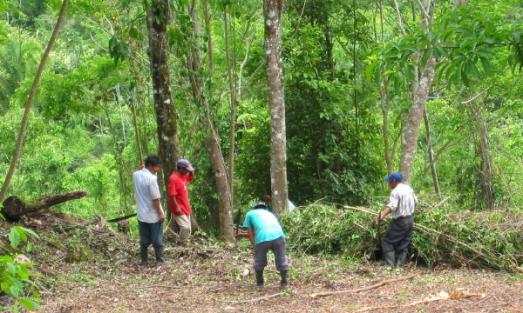 Men from near Santa Cruz clearing bush. Many edible and medicinal plants grow in the rain forest. But some can kill you.  (Photo by Joan Fry)

END_OF_DOCUMENT_TOKEN_TO_BE_REPLACED

Joan Fry at the ancient Maya site of Lamanai, 2009. She had been invited by the Museum of Belize to lecture on her book, How to Cook a Tapir: A Memoir of Belize. For more information about her life in Belize—and her other books—visit her website at joanfry.com. Photo by Lee Bernard.

“Living among the Maya of Belize was one of the biggest, most important events in my life. You only turn 21 once, and I did it in the rain forest.”

Joan Fry
How to Cook A Tapir: A Memoir of Belize (University of Nebraska Press)